Language development for children with Down syndrome 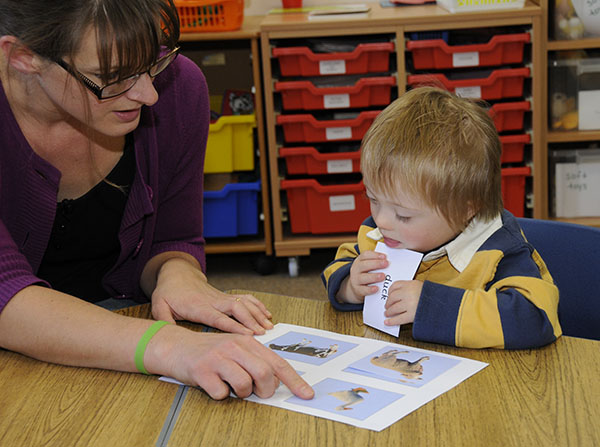 The language skills of children with Down syndrome tend to develop more slowly than for other children. There is a common pattern of relative strengths and weaknesses that can inform therapies and teaching approaches.

When considering how children learn to talk it is helpful to identify four components which underpin becoming a competent talker:

At first, all children communicate using gestures. They point to interesting objects and actions, hold things up to show them, and gesture to request things. When children communicate like this, people around them tend to name what they are looking at, helping them learn the meanings of spoken words.

To learn to talk, children have to begin to understand and then use the words they hear around them every day. Children learn many different words and build a large vocabulary. As they learn to understand more and more words they are learning more about the world that they live in.

At first, children use single words to communicate. Next, they begin to put two words together to express a range of meanings. Then they move on to build longer sentences and to use conventional grammatical markers (such as plural 's' - "dog", "dogs"; possessive 's' - "Daddy's car"; tense markers - 'ing', 'ed' - "jump", "jumping", "jumped") and word order rules to express different meanings (such as question forms - "Has John gone?" rather than statement "John has gone", and the order of actions - "Mary chases John" rather than "John chases Mary").

Research indicates that spoken vocabulary size is linked to these stages in spoken language development. Children generally have a spoken vocabulary of between 50 and 100 words before they begin to join 2 words together. They say 250 to 300 different words before they start to use longer sentences and grammatical markers in their spoken language.[1,2]

Research also suggests that the first 700 to 800 words that children learn to say are similar in many languages. The words children first learn are those that they hear used around them most frequently and in situations where they can 'see' what the words mean. There is considerable similarity in the vocabulary first learned by all children as their early experiences are similar - involving feeding, sleeping, washing, dressing, playing, going out and interacting with close family members.[1,2]

As children first learn to talk, their utterances are approximate attempts to say the words that they hear. Children's earliest spoken words may only be understood by their family. Typically developing children quite quickly learn to say words more clearly and most are intelligible at around 4 or 5 years of age. (This does not mean that they talk as accurately as adults but they talk well enough to be understood.)

Children learn to talk at widely differing rates. There may be a number of reasons, but one of the main factors in determining how fast children learn to talk is the quantity and quality of the language they experience.[ 1 ] Research also suggests that the ability to repeat words is linked to the rate of early vocabulary learning.[ 5 ] Word repetition requires verbal short-term memory and speech production skills.

Children start to say their first words at around the same time that they start to play with objects in functional and symbolic ways - for example, pretending to drink from a toy cup, feed doll with a spoon, brush hair (functional) and pretending bricks are a train (symbolic). Adults talk to children during object play, naming what they are looking at and doing.

Spoken language is also learned as children are involved in conversations and as they listen to conversations with others. Most children want to communicate and often start a conversation by 'saying' something even though it may only be babble, a gesture, or a partial attempt at a word. One factor explaining why some children experience more talk than others may be that they try to start conversations more often.

Language development for children with Down syndrome 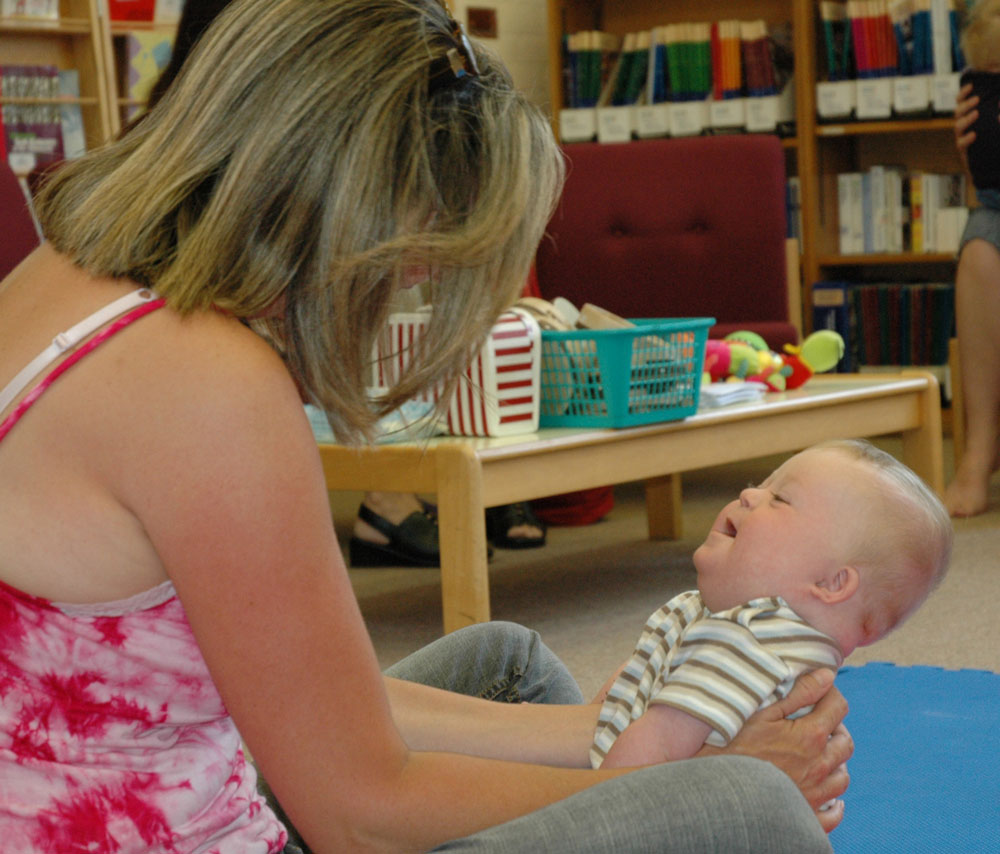 Children with Down syndrome develop more slowly than typically developing children, and language skills are are an area of particular difficulty. In addition, some aspects of speech and language development are more delayed than others. This pattern is sometimes referred to as a profile of relative strengths and weaknesses.[ 2-4 ]

It is important to note that much of the research examining the speech and language development of children with Down syndrome describes outcomes for children who have not always received optimal teaching and therapy. Some studies suggest that this pattern is not inevitable and that good quality teaching and speech and language intervention can improve outcomes for children with Down syndrome.[ 2 ]

A number of factors probably contribute to the pattern of speech and language development observed among children with Down syndrome. These also provide some guidance for intervention.

There are some research studies exploring the effectiveness of language interventions for children with Down syndrome. Although many more are needed, we can identify some guidance from those available:

Implications for teaching children with Down syndrome 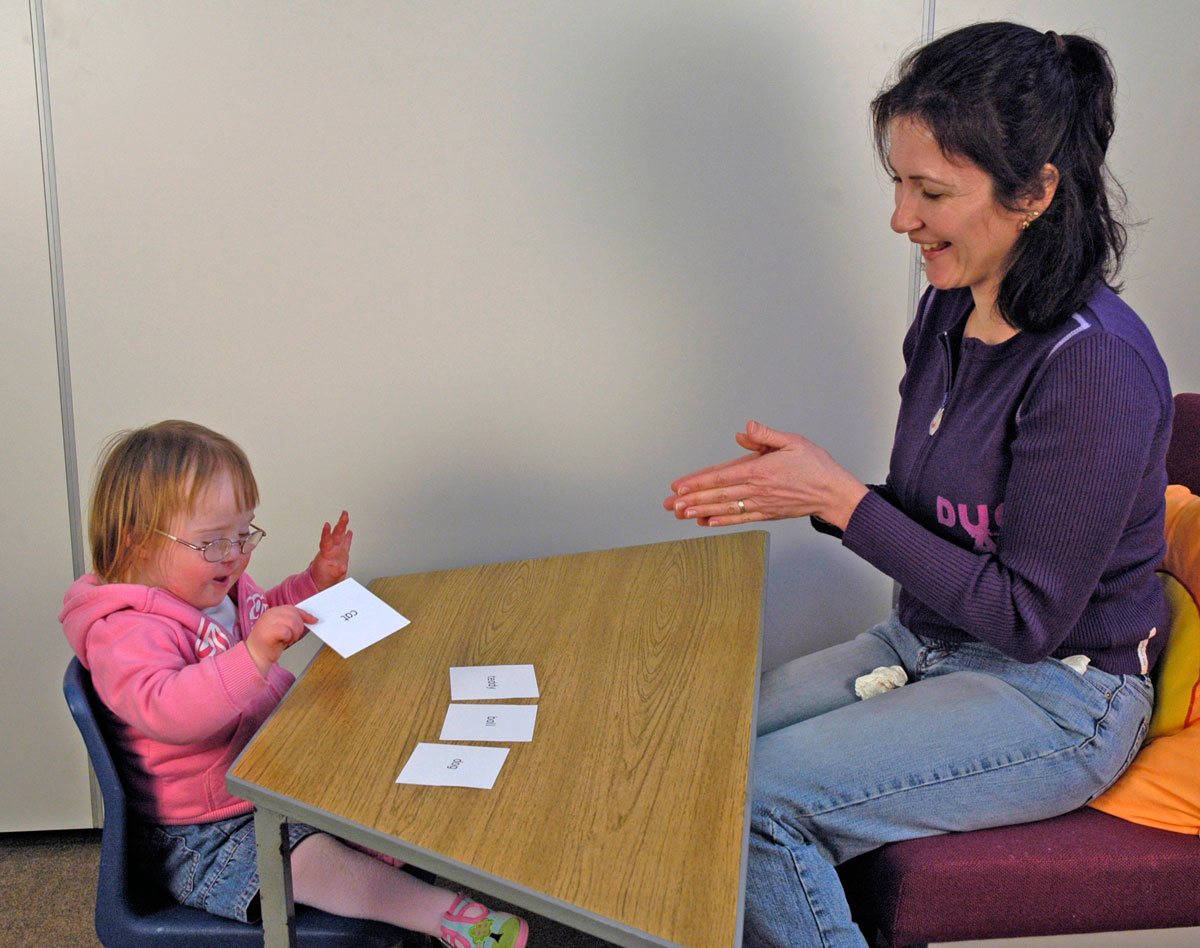