The design of See and Learn Speech

Speech development for children with Down syndrome

Children with Down syndrome begin to talk later than typically developing children and have difficulty producing clear speech.[ 1 , 2 ] The reasons for their speech difficulties are not fully understood but include:

Children use the visual information of lip and face movements (speechreading) to help them discriminate phonemes. Talking to babies in face-to-face games and 'conversations' is therefore important so that they can see a speaker's face and lip movements as they talk.[ 4 ] 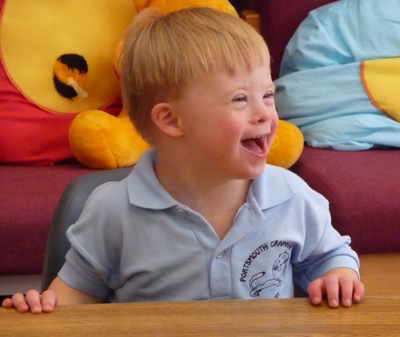 Practice and feedback are essential for developing speech clarity and intelligibility. Speech production is, in part, a motor skill, requiring motor planning and control. As with all motor skills, speech skills improve with practice and opportunities to monitor and learn from performance. Children need to produce and hear the sounds they are producing to develop clear sound and word production.[ 3 ]

Practising sounds and words develops children's verbal short term (phonological) memory.[ 5 ] This suggests that the verbal short-term memory difficulties shown by older children with Down syndrome could be, in part, a result of delayed speech sound production.

In order to be able to say a whole word clearly, a child has to store an accurate memory of the sound pattern of the word. Recent research suggests that children with Down syndrome have difficulty learning fully detailed sound patterns (phonological forms of words). They remember enough of the sound pattern to recognise the word and link it to the correct object but not enough to discriminate it from similar sounding words.[ 6 ] Difficulty in learning and remembering the fully detailed sound patterns of words may be one of the reasons for not being able to say them clearly. Activities which provide repeated opportunities to hear and say words may help children store all the sounds in words.

The available research evidence therefore suggests that it is important to help children with Down syndrome to imitate, produce and practice speech sounds and words from the first year of life to improve their speech production skills. This should lead to clearer speech, and also support word learning and verbal memory development with wider benefits for language and literacy skills.

How See and Learn Speech is designed to support speech development 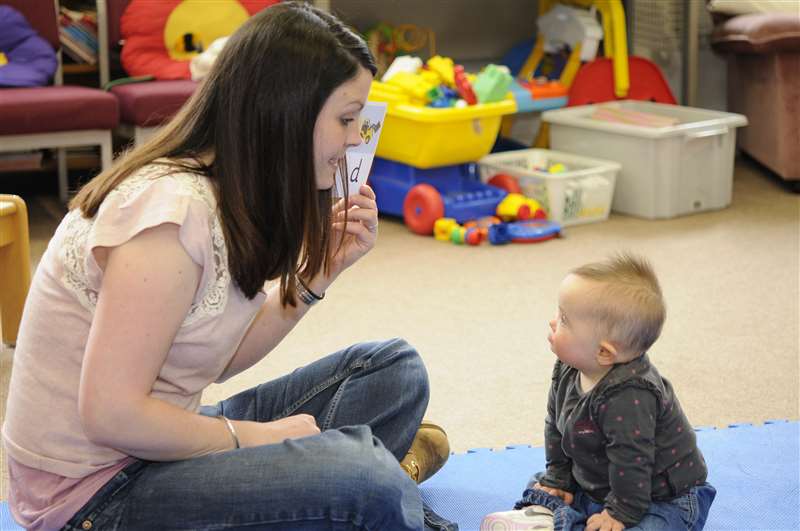 Children with Down syndrome are likely to benefit from a structured approach to speech development in addition to developing their skills through natural interactions. A structured approach increases opportunities for repetition and practice. Research suggests that it is possible to accelerate phonological development for young children with Down syndrome with repetition and practice.[ 7-9 ]

See and Learn Speech is designed to provide extra input and practice at each stage of speech development.

Babies and young children with Down syndrome should benefit from extra practice at listening to the sounds of their language, building their memory for sounds. They can also practise noticing and hearing the differences between sounds as they become familiar with them. Through this process they can develop the skills that they need to produce sounds.

See and Learn Speech Sounds is designed to help children to practise these skills.

When a child can produce a few individual sounds, they can begin to learn how to combine sounds in meaningful ways. Children with Down syndrome often struggle with the coordination necessary to move from one sound to the next, and can benefit from extra practice.

When a child has learned to combine sounds, they can begin to learn to say whole words, starting with words with one or two syllables.

Children who have learned to say shorter whole words can then move on to learn to say longer words and phrases clearly.

See and Learn Longer Words provides help with practising early words with up to four syllables and short phrases.

The benefits of improved speech skills 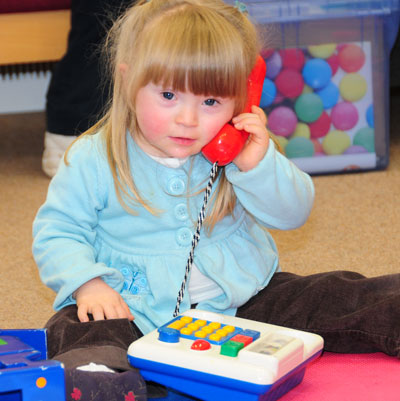 Poor speech can be a major barrier in everyday life. Speech clarity is important because it aids or hinders understanding of a person's message. It also effects our judgement of a person's abilities. When a person with Down syndrome has trouble speaking clearly, listeners may underestimate their abilities.

Some children who have difficulty communicating can become frustrated and resort to problematic behaviours to express themselves.

Improving speech clarity is therefore likely to improve quality of life for young people with Down syndrome in many ways.